Money laundering and related issues have become a major problem around the world. Inequality between rich and poor is often the result of ill-gotten money or money obtained on the basis of philosophies and theories (still taught today – even at highly reputed universities) that have accepted and wrongly legalized the manipulation, domination and abuse of people and Nature as part of the economic and political game.

It could not be more absurd! Especially given the proportion the abuse and damage has reached.

A new currency replacing all others (at first gradually and existing side by side with others) would be a means to bring more transparency and justice to the world of finance and to society as a whole. It would be felt as a bond uniting all of Humanity in a joint effort to finally take care of all and of Nature. It would give a major boost to people’s mental health, likewise much needed today!

The present world is dominated by money and financial institutions that may have ethical standards incorporated in their statutes, but that have often been far less than ethical in the way they treat people and Nature.

This unhealthy situation cannot be sustained. We are all becoming ill wherever we live, because we live in the same environment or Nature, so negatively affected by unhealthy, damaging and self-destructive practices – is self-destruction not a mental illness? Only a joint and global approach can reverse this downward and ever more dangerous spiral. A new global currency is part of this approach to get us all out of it. 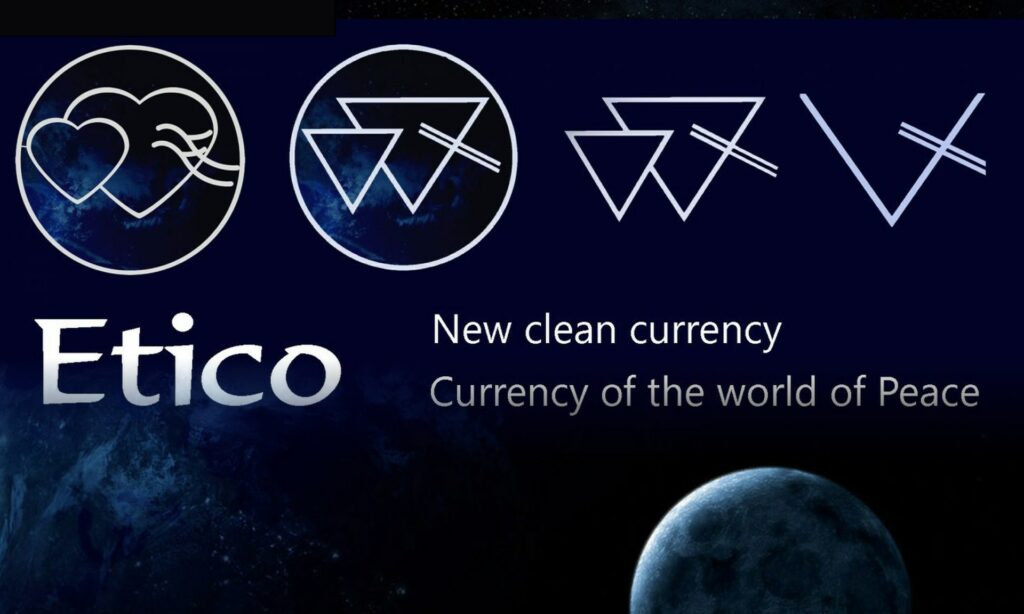 Money, a tool for progress

Money now is overwhelmingly an aim in itself. Often even an obsession with inhuman and unethical consequences.

Money should be a tool for progress and not an instrument to accumulate wealth at the expense of so many people and Nature. It is unethical because it does not match the fundamentals of true humanity and the Lex Mater (respect for people and respect for Nature are inalienable essential principles).

The present world needs to boost humanity or human values in all sectors of life and society. The Global Peace Charter should be discussed and adopted by governments, institutions (financial and others), organizations and the public in general.

A new currency, the etico (from the Spanish word ético, which means ethical), needs to be introduced world-wide to gradually replace all existing currencies in order to reduce abuse and to increase fairness.

Money has contributed to making this world a world of violence and abuse, because it has allowed some to feed their excessive lust for power and riches. They have often fed it royally and selfishly without leaving enough to others or damaging people and Nature.

A new global institution, the Global Etical Fund or Global Peace Fund, should be created to bring real values into the financial world and elsewhere. The guideline of the GPF would be the human values as explained in the Global Peace Charter.

The etico would signal confidence and trust. One global currency would take away the need for rumours (often false ones just to influence the market) and need for speculation (often so abusive). It would simplify the workings of the financial system (complication is often still seen as a source of power).

The etico would allow to control the so-called dirty money or money obtained through activities that hurt people and Nature and that involve violence of all kinds.

GPF would be a Fund for solidarity on a scale never seen in history. Money in the different currencies of today would be exchanged against the etico with a 1 to 5% or higher percentage (depending on the amount exchanged) being deducted and transferred to the Fund to be spent on humanitarian projects and Nature care world-wide.

The financial crisis and more recently the corona pandemic have clearly shown that governments are willing to put up billions to save banks and to combat viruses.

Why cannot they show the same willingness to save this planet and combat Nature degradation, poverty, social injustice, commercial exploitation and other ills making this planet and our society weak and feeble?

With the agreement of all humanity-inspired governments – they will all need to become champions in humanity if we are to get out of the present political, economic, financial, health and other crises, could print extra eticos to finance investments that Earth needs now.

Today, some even still dare to talk about investing less in preventing climate change, when more needs to be invested. Urgently! Anyone with the right kind of vision and intelligence (CIQ) can sense that ever more clearly.

Etico and ethics across the board… the tool this world of violence towards people and towards Nature has been waiting for ages already.

Let’s not wait and see whether our living environment becomes more unlivable for ever more people. Let’s join hands across the globe and make life livable for all and for all future generations! They will be grateful we did not put them in more suffering and hardship.

They will be proud of us! Let’s go for it.

Ambassadors of Nature and Peace

Letter to the UN

Petitions – GPC and others

Danellandia – Pax 21 was created on 28 March, 2004. It is based on discussions about this world and its many problems with people from different backgrounds, countries, religions and age.

Danellandia defined 25 human values as the basis for its campaign to make this world a better and more just place in many fields of human activities: politics, economics, the media, personal relationships, education, Nature care…

You can help to promote these values by sharing the material on this site.

Become a Danellandian by promoting human values to  boost peace.

Strong human values are a passport to a sustainable future.

The world of Peace can become a reality!

Please subscribe to our Newsletter to stay informed about the latest developments in Danellandia.

Thank you for sharing our site and for any contribution you make to make this mad world better and more just.